Attacks on President Trump Show the Political Class Has Learned Nothing 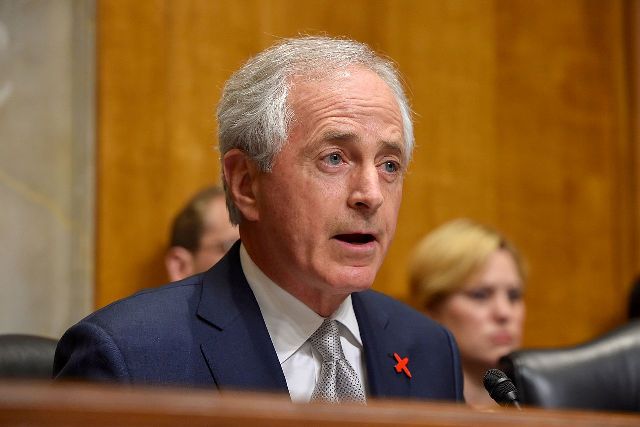 The spat between President Donald Trump and Senator Bob Corker (R-TN) reveals a great deal about how little the political class has learned from the president’s election, and just how out of touch with the American people it remains.

Nearly 63 million citizens, red and blue alike, voted for President Trump as a populist, bull in a china shop, change candidate. His election over 16 accomplished primary opponents and a Clinton machine backed by practically all of the media and popular culture represented a remarkable rejection of the country’s political elite.

Part of what the American people rejected was the agenda of the Washington D.C. “smart set.” The “forgotten men and women” who voted for President Trump held career politicians responsible for disasters foreign and domestic, from the wars they often sent other people’s children to die in, to the immigration policies and trade deals they cut that millions of Americans felt violated their sovereignty and cost them their jobs. Simply put, the public felt that under presidents Democrat and Republican its interests were not taken into account, or worse directly attacked. While the lives of millions of Americans got worse, they saw the lives of elites getting better – the politicians grew more powerful and their cronies richer.

Trump’s victory was a promise to the people to drain this “swamp.” He promised these forgotten Americans a seat at the bargaining table. Business as usual was over. So too was the political correctness that Americans had grown sick and tired of. The people wanted representatives who were honest in calling things the way they saw them, and weren’t afraid to ruffle feathers.

Naturally, in the months since President Trump’s election, those who had done well under the political status quo have fought the president’s agenda tooth and nail. And they might dislike the president’s style even more than his substance.

The “resistance” to the president includes members of his own party. Republican Sen. Bob Corker’s bout with President Trump over his approach to foreign policy, among other things, are just the latest indicator that the D.C. elite cannot come to terms with President Trump’s victory or what it represented.

Sen. Corker, a high-ranking member of the senate when it comes to foreign policy, in a recent interview pleaded with President Trump to “leave it [foreign policy] to the professionals…” i.e. turn over the keys to the “experts” in his cabinet, and Congressmen like himself. Perhaps Sen. Corker forgot that President Trump’s advisors serve at his pleasure, and their job is to execute his agenda – which is the agenda the American people voted for.

Sen. Corker also disrespectfully referred to the White House as an “adult day care center.” He said he “hope[s] the staff over there [at the White House] would figure out ways of controlling” the president. It is this very condescension that the president’s voters rejected in electing him. And the idea that the president shouldn’t be free to speak his mind – something the American people rewarded him for with their votes – further illustrates Sen. Corker’s disdain for their wishes.

The senator’s view is also inconsistent with the system of government our Founders envisioned. Many have argued that the ideal was for government to be populated by citizen legislators, who humbly served and faithfully represented their communities, and then went back to their families and jobs. There is evidence for this view. As James Madison recorded in his Notes of Debates in the Federal Convention of 1787, Rhode Island’s Roger Sherman said that “Representatives ought to return home and mix with the people. By remaining at the seat of Govt. they would acquire the habits of the place which might differ from those of their Constituents.” Roger Sherman, like Donald Trump, was anti-swamp.

Relatedly, and more importantly, the Founders argued that the legitimacy of government hinged upon the consent of the governed. In a republic, politicians are supposed to represent the people, not become consumed by the trappings of their office. Does a political class dead-set on thwarting President Trump’s agenda – thwarting the agenda Americans voted for – seem like it’s doing a good job of representing them?

Now we should not be surprised that the president is encountering all of this resistance. Whether in business or politics, bureaucracies are resistant to change agents because bureaucrats care most about retaining their power — keeping the gravy train going. But it is those who come at problems from a fresh perspective, the “disruptors” who challenge conventional wisdom, that are essential to ensuring dynamism and growth. Doing the same thing again over and over again, and in the estimation of millions of Americans failing them, defines insanity.

The Trump candidacy was about taking a sledgehammer to the political establishment. The American people preferred the successful businessman to the credentialed career politicians and bureaucrats.

Just like a business that fails to serve its customers well, a political system that fails to serve its citizens must be shaken up, or face certain disaster. For millions of Americans, President Trump was a response to this impending disaster. Politicians like Sen. Corker ought to figure out ways to support the people’s agenda, rather than attacking their change agent.

August 21, 2020
PrevPreviousSome Banks Are Too Small to Succeed
NextTrump’s Tax Reform Plan is About Making America Great Again for the Middle ClassNext