Trump is the Disruptor We Need, and He Deserves the Support of GOP Elites 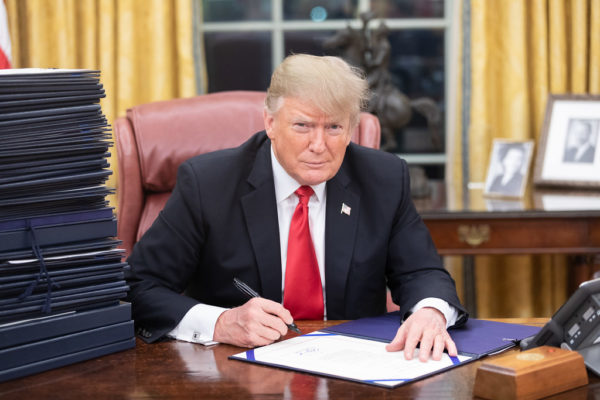 If you only watched cable news, read the New York Times and listened to leaders in the House of Representatives, you’d think America was in crisis.

And well, maybe it is in crisis — for them. By working to “drain the swamp,” President Trump has threatened the wealth and power of an establishment invested in ever-bigger government. The efforts of this establishment to tank Trump’s presidency seem to be unraveling, and so the establishment is panicking.

But if you ignore the Washington hysterics for a second and look at the situation with clear eyes, more than halfway through President Trump’s first term it looks like “morning in America.”

The economy has boomed.

There are more jobs than people to fill them.

Crushing regulatory burdens have been lifted.

American workers are poised to benefit from better trade deals.

Allies and partners are no longer freeriding on the backs of U.S. taxpayers, but paying their fair share for global security.

Our adversaries are no longer marching. They’re on their heels. Some of our foes, like ISIS, have been defeated.

Trump has kept his promises. Where he hasn’t yet fully succeeded, on complex issues like immigration, or a trade deal with China, he’s fighting tooth and nail to seal the deal.

To summarize, the president has done a remarkable job of unleashing our economy, achieving peace through strength and every day putting America first.

He’s done it all in the face of: A Congress and even his own executive branch employees who often try to hinder him; a media and popular culture that hates his guts; a “Resistance” that demands his impeachment and removal; and a small but influential group of “Never Trump” Republicans who refuse to accept him.

It is this last group that really bothers me.

The intellectual elites in the GOP who refuse to come around on Trump are being childish. By not rallying behind the president, they are hurting the cause many of them have been devoted to for their whole lives.

These folks have supported most of Trump’s policies for years. I’m willing to bet if they saw the list of his first-term accomplishments and didn’t know he was the president behind them, they’d all be cheering on the president like he was Ronald Reagan.

So their real beef must be with Trump’s style.

They don’t like his tough talk, nor the way he delivers his message. They think he’s undiplomatic. They get queasy over his rocking of the boat.

I think they’re wrong to dismiss Trump on these grounds.

They should want Trump to be Trump – bold, brash and unafraid. That is what the times, and the level of opposition to the Republican agenda, demand.

It is exactly because of who Trump is that for whatever his flaws, he is the right man for this time – maybe the only man who can stand up to the tenacious resistance he faces at home and abroad to achieve the agenda the American people elected him on, whether in reorienting trade, commerce and foreign policy in our favor, or draining the swamp. Trump isn’t beholden to special interests, and he doesn’t care that when he leaves Pennsylvania Avenue he won’t be invited to fancy cocktail parties, or celebrated on magazine covers. His focus is the national interest. That is what should really matter.

This country wanted a disruptor, and I believe it made the right choice. Electing another status quo politician would’ve meant that our country would continue muddling along, while our enemies and competitors gained. The elites might do alright, but the millions of forgotten men and women that make up our great middle class would suffer.

The proof of Trump’s effectiveness in turning things around is in the pudding of his record.

I believed and continue to believe that America needs President Trump to break things for eight years. We need him to challenge conventional wisdom. We need him to take on entrenched bureaucracies. We need him to bring balance to a world order that we’ve foolishly allowed to be tilted against us.

For too long as a country it’s been like we’ve been playing a sport blindfolded, with one arm tied behind our back.

To my friends in the Republican Party, I would simply ask this question: What president has achieved your stated agenda better than this one?

We need to let Trump be Trump – unafraid, uncompromising and relentless in pursuit of the America First agenda, for the benefit of all Americans.

August 21, 2020
PrevPreviousPerceived Racism and the Cost of Political Correctness
NextProud to Join Ave Maria School of Law Board of Regents as Honorary MemberNext