Week 1 Media Tour – The Harder You Work, The Luckier You Get 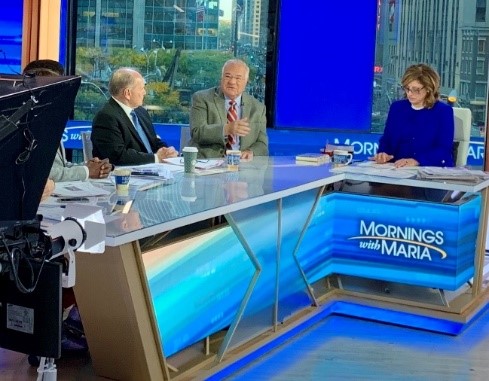 My memoir about building Ameritrade, The Harder You Work, The Luckier You Get, hit stands this week.  It took a lot of work and wouldn’t have happened without people like my collaborator, G. F. Lichtenberg, my editor at Simon & Schuster, Priscilla Painton, my “book mentor,” Bob Barnett, and Alfred Levitt, who kept us all on track!

One thing I learned at Ameritrade was marketing matters.  So I’ll be spending the next couple of weeks trying to get the word out about The Harder You Work, The Luckier You Get.  There have been some long days already, but it’s been fun and reminds me of doing the Road Show when Ameritrade went public!

I thought I would share some of these media appearances here.

It started Sunday, November 3 when CBS Sunday Morning aired my commentary.  (CBS also published an excerpt from the book.)

From there, we were off to the races on Monday, with my appearance on Fox & Friends where Steve Doocey interviewed me about the book and some current events.

It was fun then to spend time with Brian Kilmeade on his Fox News radio show and talk about the book.  (I’ve already finished his excellent book on Sam Houston and recommend it highly for anyone who likes engaging historical-like novels.)

Later in the day, Neil Cavuto interviewed me on his show Cavuto Coast to Coast.

Tuesday started with the Wall Street Journal publishing my op-ed, In Praise of Today’s Entrepreneurs.

From there, it was off the Bloomberg where Tom Keene interviewed me on his television and radio shows, Surveillance.

And finally on Tuesday, I had the chance to discuss my book with Dana Perino with the night ending by Larry Elder interviewing me on his excellent radio show.

Wednesday morning began with a terrific conversation with Maria Bartiromo and her panel on Mornings with Maria.

And the week wrapped up with me doing Hugh Hewitt’s radio show.

August 21, 2020
PrevPreviousThe Harder You Work, The Luckier You Get – For Sale Starting November 5
NextExperts: Saving some operations is the best hope for Omaha’s TD Ameritrade jobsNext