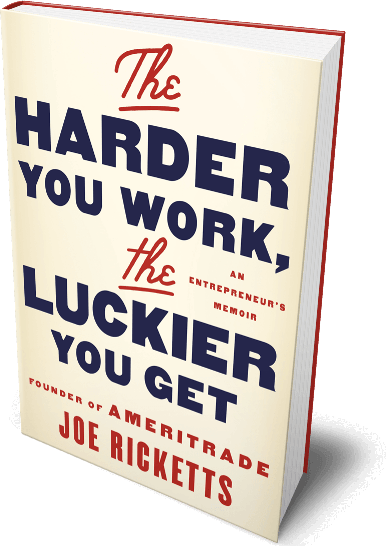 While making media appearances to promote my book, The Harder You Work, The Luckier You Get, I had the chance to talk about our free enterprise system – a phrase I prefer to capitalism – and socialism.  In fact, I kicked things off on my book tour with an essay on CBS Sunday Morning about why I think the free enterprise system is the engine of opportunity.

During my book tour, several interviewers asked me what socialist policies would have meant for Ameritrade back in the day, and what those policies would mean for our shared futures today.  In those short-format interviews, it’s often difficult to discuss these complex issues thoughtfully without the message getting distilled down to soundbites – e.g., “free enterprise is great and socialism will be our ruin.”  (Elizabeth Warren seized on one of these moments, including me in an ad she ran attacking successful businesspeople.)  But like so many things in life, soundbites don’t really do this important topic justice.

So I was interested to read Professor Walter Block’s recent opinion editorial in the Wall Street Journal, Bad Capitalism and Good Socialism.  In many ways, I couldn’t have said it better than Professor Block – there are different flavors of capitalism and different flavors of socialism.  Neither system is without its flaws.  In fact, during one of my recent interviews, I acknowledged that at its core, socialism sounds great – society asking each of us to contribute according to his ability and providing to each of us according to his need.  And at small scales, as Professor Block points out, socialism can work – think the convent, monastery, kibbutz, commune, syndicalist association, and cooperative.  At large scale, however, where government must own and control the means of production, nationalizing industries in the pursuit of social justice, it ends very badly – think Venezuela, East Germany, Maoist China and the U.S.S.R.

On the flipside, the free enterprise system, if left wholly unregulated, can run amok.  There are plenty examples of this – e.g., unsafe working conditions at the dawn of the industrial era – but one that I think makes the point about the potential pitfalls of free enterprise is the fur trappers of the mid-1800s.  Those entrepreneurial adventurers would sometimes kill one another if doing so was a profit-maximizing strategy; not a particularly attractive advertisement for free enterprise.

But this bare-knuckle, broken version of free enterprise isn’t the only variety.  In fact, it’s not even the most prevalent one.  For just as socialism has versions that work and others that don’t, there’s a moderated version of free enterprise that has created more wealth and raised more people out of poverty than any system in human history.  In this high-functioning version of free enterprise, entrepreneurs are given a relatively unfettered field on which to reimagine the world, and from this springs social prosperity at a scale socialism of all stripes can never achieve.  And scale matters.  A system that works for a few dozen people on a kibbutz is great, but doesn’t answer the more complex challenges hundreds of millions of people face when trying to live and work together.

So is free enterprise great and socialism evil?  That’s the wrong question.  The right question is how we improve the guardrails around free enterprise to assure social justice doesn’t become roadkill while preserving enough freedom that new businesses can start and prosper.  For it’s those new businesses, and the entrepreneurs that create them, that will provide the jobs and economic opportunity that propels us – all of us – forward.

And when I talk about “jobs” it’s important to make clear I’m referring to net new jobs.  Those are the new jobs that are above and beyond the ones that simply replace the jobs lost each year through normal churn.  And those net new jobs really matter, as most economists agree it takes a 3% annual GDP increase to accommodate all the new jobseekers coming into the workforce.  Put differently, we need those net new jobs to expand the pool of opportunity so more people can prosper from the free enterprise system.

August 11, 2020
PrevPreviousMedia Appearances THE HARDER YOU WORK, THE LUCKIER YOU GET
NextCreating the Delicious PrimeLife Bison BurgersNext