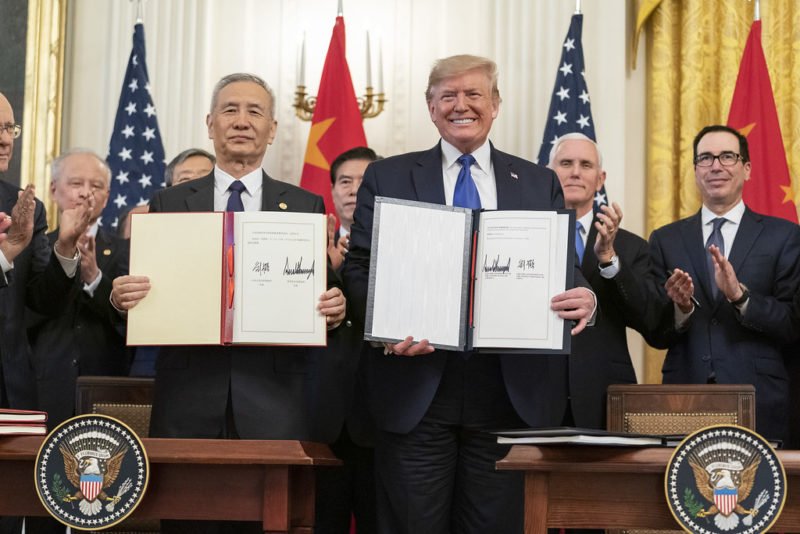 President Donald Trump has, like no president before him, stood up for the American people against Communist China.

He has called out the Chinese regime for lying, cheating and stealing its way into challenging our power, while American workers lost their jobs and opioids flooded our towns.

More importantly than calling out China, he has taken action. The president has hit the regime where it hurts by imposing tariffs that have crippled the economy that helps keep General Secretary Xi and his cronies in power.

The purpose of Trump’s tough talk and tariffs is to force China into making a trade deal that will even the playing field.

Right now, it is a totally one-sided relationship. China steals hundreds of billions of dollars in intellectual property every year, and its trade practices are unfair and anti-competitive.

This is not even to mention things we don’t often think about like the untold millions if not billions China robs of American businesses by allowing its people to sell knockoff goods.

The status quo takes food off of your table; it makes it harder to send your kids to college; and it funds the Chinese Communist Party’s pursuit of world dominance, threatening your freedom.

So the president has said enough is enough.

But getting to a deal has been challenging.

One of the major sticking points is “enforceability.” How can we be sure that the Chinese will hold up their end of the bargain? After all, time and time again in the past they’ve played Americans for fools. They’ve been proven right.

But there’s still another problem that doesn’t get enough attention.

Let’s say tomorrow China agrees to every U.S. demand in a deal. They tell us they are deathly serious about honoring it. They even take immediate actions that might cost them a lot of money to show us that this time is different—that they mean what they say.

What if I told you that they were still holding most if not all of the cards.

How could this be?

China’s laws make it so.

Did you know that China’s State Security Law, passed in 2015, says that every citizen, company and organization has “the responsibility and obligation to maintain state security?”

Therefore, under China’s National Intelligence Law, all organizations and individuals are obligated to “support, provide assistance, and cooperate in national intelligence work.”

The same goes for “counter-espionage work.”

Then, what if I told you that according to some experts, China’s new cryptography law could require all encryption to be turned over to the state, with it potentially allowing the state to access all the data that was encrypted (which it can then share with state-run businesses)—again on “state security” grounds?

Do you think their definitions are the same as yours and mine?

It’s pretty clear that under Chinese law, anyone doing business on the mainland and even off of it with Chinese entities could be a sitting duck.

Also, consider that China requires that Communist Party cells sit in its own companies, including those that have joint ventures with American companies.

And remember, this is a country without the rule of law or private property rights. Heck, it has been holding its own people—one to two million Uighur Muslims in Xinjiang province—in modern-day gulags.

The truth is that the law is only what the Communist Party says it is.

And since the Party does what is best for the Party, the law serves the Party’s ends.

It would be foolish to think the Communist Party wants to engage in free and fair trade with the U.S. any more than it does for Hong Kong to retain its independence.

One can easily see a scenario where China claims it is fully complying with the deal while doing all sorts of things that totally violate it—with the excuse that it was “just following the law.”

We’ve gotten ripped off for far too long. President Trump has stood up and done something about it. It would be wonderful if we could agree to a trade deal that the Communist Party would keep. But we must remember who we are dealing with.

To succeed, the president will truly need the “Art of the Deal.”